Edustuff brought to you JAMB Idioms for 2021 because you will come across idioms in JAMB use of English, JAMB idioms PDF is also available, so here are 30 Likely JAMB idioms and their meaning on Edustuff, many student do find it hard to pass English which is not supposed to be, use of English can boost your JAMB score if you study it very well, you’ll pass your JAMB with nothing less than 300 if you do well in other subjects. 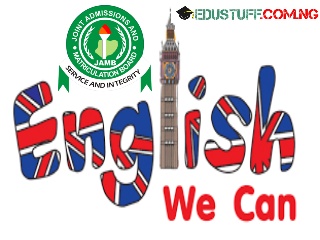 JAMB Idioms And Their Meaning 2021

What is idiomatic expression or idioms?

Idiomatic expressions are groups of words with an established meaning unrelated to the meanings of the individual words. Sometimes called an expression, an idiom can be very colorful and make a ‘picture’ in our minds. So I will show you guys 30 JAMB idioms.

CALL A SPADE A SPADE

To state the truth about something even if it’s unpopular or unpleasant
☑️  I know he’s your brother, but let’s call a spade a spade: he’s pretty lazy.

CALL IT A DAY

To stop working on something
☑️   It’s almost 9pm. I think we should call it a day and finish the report tomorrow.

When something is inexpensive or good value for money
☑️  It doesn’t look it, but our new sofa was (as) cheap as chips!

Information or rumours that have been passed on by many people and are no longer reliable
☑️   John and Maggie from the office haven’t actually announced they’re getting a divorce. It’s probably just Chinese whispers.

To hold a grudge/be angry about something that happened in the past, or to be arrogant and think too highly of oneself
☑️ Whenever we mention his childhood, he gets really angry. He’s got a chip on his shoulder about it.
☑️  The new sales guy at the office has a real chip on his shoulder. He’s not even that good!

To become silent or stop talking
☑️ When Bill came into the room, Jenny just seemed to clam up. I think she likes him!

To get nervous or to have second thoughts about doing something
☑️  He’s getting cold feet about the wedding, but I told him that was perfectly normal

A BLESSING IN DISGUISE

Something that appears bad at first but ends up having good results
☑️ Missing that plane turned out to be a blessing in disguise because I got to spend more time with my family.

A SANDWICH SHORT OF A PICNIC

A humorous way of saying someone is stupid or is a bit mad
☑️ He brought only shorts and t-shirts when he went to Sweden in the winter – I think he might be a sandwich short of a picnic!

Something is very close or near
☑️ Luckily the wedding is just a stone’s throw from our hotel so we can walk there.

What you do is more important than what you say; someone’s words may not be trustworthy
☑️ Person A: “John keeps saying he wants to take me out for dinner, but then he never does!”
Person B: “Actions speak louder than words.“

ADD FUEL TO THE FIRE

When someone does something to make a bad situation worse
☑️  When Sarah started laughing during the argument, it really added fuel to the fire!

To make a bad situation worse
☑️  As if breaking my arm isn’t bad enough, to add insult to injury I have to pay £1,000 in hospital fees as I didn’t have travel insurance!

To be eagerly waiting to hear about something
☑️
Person A: “I have to tell you about what happened on our trip to Spain…”
Person B: “I’m all ears!”

To be at a point in your life when you need to make an important decision
☑️  I was at a crossroads when I was offered a job in the US, but my boyfriend wanted to stay in London.

BARKING UP THE WRONG TREE

To be wrong or misguided about the reason for something
☑️ He thinks the company’s problems can be solved just by firing the sales team, but he’s barking up the wrong tree.

BEAT ABOUT THE BUSH

To talk about unimportant things because you’re avoiding a particular topic
☑️
Stop beating about the bush! Are you planning to quit university, or not?

It’s better to do something late than not at all
☑️
Person A: “Sorry I missed your birthday! There’s a card in the post.”
Person B: “Don’t worry. Better late than never!”

BETWEEN A ROCK AND A HARD PLACE

To be in a difficult situation where both options are bad
☑️
Person A: “If I go to the wedding mum will be upset, but if I don’t go then I’ll be letting down the rest of the family!”
Person B: “Sounds like you’re caught between a rock and a hard place.”

BITE OFF MORE THAN ONE CAN CHEW

To do too much or take something on that is too difficult
☑️ Person A: “I’m going to start that weekend job at the museum on top of my full-time job because I really need the money.”
Person B: “Sounds like a lot of work! Don’t bite off more than you can chew.”

To decide to do something that is difficult or unpleasant, but necessary.
☑️
You’re going to have to bite the bullet and tell your ex-(girlfriend) that you need the apartment back.

To do something that helps you get rid of stress, energy or anger.
☑️ After my meeting with the boss, I went for a run to blow off steam.

To say that a set of instructions or task is simple or easy
☑️ To make the salad dressing, you just put oil, vinegar, honey and mustard into a bowl, mix them together and bob’s your uncle!

Something that is very ordinary or basic, nothing special
☑️ Despite the excellent reviews, we thought the restaurant was just bog-standard.

When learning idioms in English, you need to watch out for old-fashioned expressions. For example, you probably know the idiom ‘It’s raining cats and dogs’. However, most Brits would never use this expression now. It is outdated. Instead we say: ‘It’s bucketing it down!’, ‘It’s chucking it down!’ or ‘It’s pi*sing it down!’.

Work that has been done badly, in a clumsy, lazy way
☑️
The original builders did such a bodge job of our kitchen that we had to get it completely redone.

An informal way of asking someone to move to make room for you
☑️ Could you budge up a bit so I can sit down?

BURY ONE’S HEAD IN THE SAND

To refuse to think about or confront serious issues or situations

☑️ Martin just buries his head in the sand when it comes to his financial problems.

Note: In British English slang, the word ‘chops’ is used to mean ‘mouth’. So the idiom above literally means ‘punch in the mouth’.

BY THE SKIN OF ONE’S TEETH

To narrowly succeed in doing something
☑️  The traffic was terrible so we only made the plane by the skin of our teeth!

You also download the JAMB idioms PDF file to your phone to reduce stress of coming online Everytime.

If you study the JAMB idioms very well you won’t have problem with JAMB questions on idioms.

What Is School For ? | The Truth About The School System