JAMB Prohibited Items: This article contains the list of items prohibited by JAMB in the examination hall as published by the board via their bulletin. 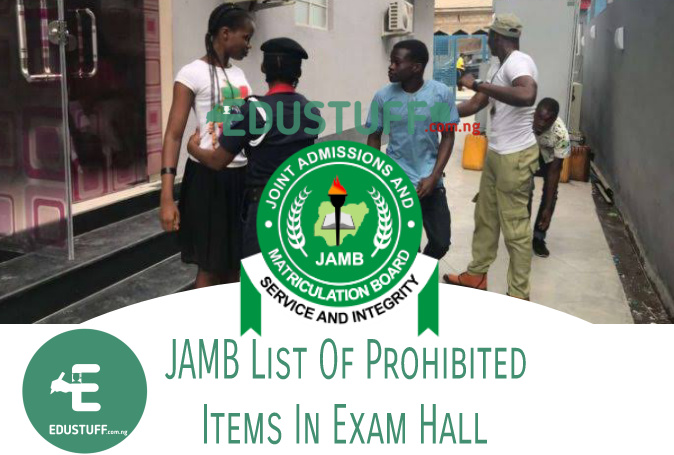 All UTME candidates need to prepare well and it is also wise for them not to go against any of the rules of The Joint Admission and Matriculation Board (JAMB). Edustuff is helping the candidates with countless articles.

There are many rules laid down for the UTME candidates and one of which is the rule prohibiting some particular items into the exam Hall.

JAMB officials must check the UTME candidates at the entrance of the exam center before entering.

To avoid the embarrassment of any kind, Edustuff listed you all the JAMB prohibited items:

1. Phone: There’s no phone allowed in the exam Hall as this can lead to examination malpractice.

2. Wristwatch: A wristwatch watch or any other wristband of any kind is not allowed in the hall.

3. Pen, pencil and books or any other reading materials: Stationery are not allowed in the exam Hall since students will be operating on the computer system.

4. ATM card: No ATM card of any kind is allowed in the exam Hall.

5. Sunshade: Sunshade and other fancy glasses are not allowed into the Hall.

6. No cap, “gele,” or scarf: For both ladies and men, head tie or headwear like the cap is prohibited because some items can be sneaked under those wears into the exam Hall.

It can only be allowed based on some Religion like the Muslims and they will also be properly examined before proceeding into the Hall as observed by Edustuff.

7. Smart appearance: Both genders need to look smart in their dressing. They shouldn’t look tout or rugged.

8. Earpiece/ headphones: Earplugs, earphones, etc, are not allowed into the Exam Hall.

9. Smart lenses, Bluetooth device, and USB cable are not allowed into the Exam Hall as this could lead to examination malpractice.