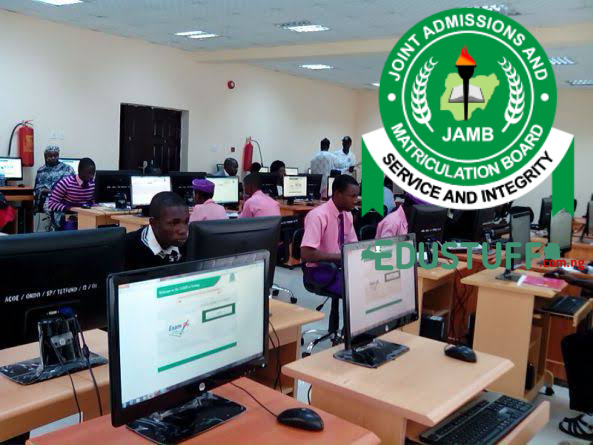 JAMB is likely to repeat questions, that is why the past questions and answers are important, so Edustuff decided to compile you some randomly selected JAMB Chemistry repeated questions.

You’ll answer 40 Chemistry questions in Jamb if it is one of your selected subjects.

2. A sample of gas with an initial volume of 2.5 dm3 is heated and then allowed to expand to 7.5 dm3 at constant at pressure. What is the ratio of the final temperature of the initial absolute temperature?

4. Which of the following will act as both oxidizing agents and reducing agents?

5. A metal which can be used as sacrificial anode for preventing corrosion of length of iron pipe is

6. Which of the following increases as boiling water changes to steam?

A. Temperature of the system

B. degree of disorder of the system

ANSWER: B (Degree of disorder of the system)

7. Which of the following is stable to heat

8. Which of the following will precipitate in dil. HCl

9. Which of the following does NOT contain aluminum as a component?

10. The removal of rust from iron by treatment with tetraoxosulphate (vi) acid is based on the

A. Hydrolysis of the iron

B. Reaction of acid with base

C. Oxidation of the rust

D. Dehydration of the iron

ANSWER: D ( Dehydration of the iron )

12. The energy of a photon having a wavelength of 10-10m is – in this case they may change the value of the wavelength in another year

1 4. A bullet fired vertically upward from a gun held 2.0m above the ground reaches its maximum height in 4.0 s. calculate its initial velocity.

15. There is a large temperature interval between the melting point and the boiling point of metal because:

A. metals have a very high melting point

C. melting does not break the metallic bond but boiling does

D. the crystal lattice of metal is easily broken

17. Which of the following substances is not a homogeneous mixture?

18. Ethene, when passed into concentrated H2SO4, is rapidly absorbed. The product is diluted with water and then warmed to produce

19. A certain liquid has a high boiling point. It is viscous, non-toxic, and miscible with water to be hygroscopic; this liquid most likely to be

20. Which of the following statement is TRUE of the complete hydrolysis of a glyceride by sodium hydroxide?

A. 3 moles of NaOH are required for each mole of glyceride

B. 3 moles of glycerol are produced

C. only one mole of soap is formed

D. concentrated H2SO4 is essential for the completion of the reaction.

21. An element used in the production of matches is

22.Which of these alloys contains copper?

23. If the molecular mass of tetraoxosulphate (VI) acid is 98, calculate its vapour density.

24. The situation obtained when a perfect gas expands into a vacuum is

Ans: ΔH is zero and T Δ S is positive

25. The knowledge of half-life can be used to

27. The presence of ammonia gas in a desiccator can exclusively be removed by

28. The refreshing and characteristic taste of soda water and other soft drinks is as a result of the presence of

29. Which of the following is used to power steam engines?

30. The periodic classification is an arrangement of the elements