How to Apply for National Identification Number (NIN) 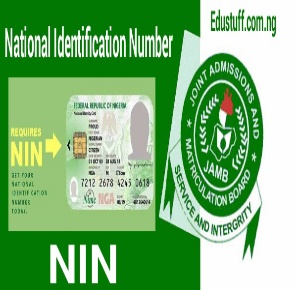 How to Apply for National Identification Number (NIN) How to Apply for NIN: In this write up it will be revealed to you the meaning of NIN , eligibility of NIN , the available registration center, importance of NIN, and  more.

“One of the purpose of writing this on Edustuff is that NIN may be compulsory for JAMB registeration from 2021, if we can recall it was initiated in 2020 but was later cancelled for the 2020 Jamb registeration.”

It is compulsory for every citizen and legal resident of Nigeria to enroll for the National Identification Number. Therefore, this article will focus on How to Apply for NIN in Nigeria and obtain the Card as well.

WHAT IS A NIN?

The National Identification Number (NIN) is a set of numbers assigned to an individual upon successful enrolment. Enrolment consists of the recording of an individual’s demographic data and capture of the ten (10) fingerprints, head-to-shoulder facial picture and digital signature, which are all used to cross-check existing data in the National Identity Database to confirm that there is no previous entry of the same data.
Once this (de-duplication) process is completed the data is then stored with a unique NIN that was assigned to it. The NIN once issued to a person cannot be used again, (that is, it cannot be issued to another person even if the previous person is dead). It is the NIN that helps to tie all records about a person in the database and is used to check the identity verified.
NOTE THE FOLLOWING on How to Apply for National Identification Number (NIN)

The National Identification Number (NIN) consists of 11 non- intelligible numbers randomly chosen and assigned to an individual at the completion of enrolment into the National Identity Database (NIDB).

Once a NIN is assigned to an individual, it can never be reassigned, given or used by another person – that makes it unique in nature.

In the case of the demise of an individual, his/her NIN is retired once a death certificate is presented to the Commission and the individual’s death is established.

The NIN is used to tie all records about an individual in the database and is also used to establish or verify his/her identity.

All citizens and legal residents in Nigeria, from age zero (birth) and above are eligible to enrol for their NINs.

The NIN should be closely guarded by individuals and not revealed to all and sundry except to relevant authorities when requested (for instance it shouldn’t be disclosed online over social media and should not be printed along with contact details on business cards or other office stationery).

It is mandatory for every citizen and legal resident to enrol for the National Identification Number (NIN). The process is the same whether you choose the self-service or you require an assisted service.

Minors are not issued with the National Identity cards until they attain the age of 16.

COLLECTION OF THE NIN

At the completion of the enrolment process, applicant will be issued two (2) slips:  (a) Transaction Slip (b) NIN Slip indicating completion of enrolment.

Applicants ideally collect their NINs at the enrolment centres where they enrolled, but in certain circumstances they can request the NINs be transferred to other centres of their choice.

NIN can only be collected by an individual after biometric verification and not by proxy.

WHY YOU NEED YOUR NIN