JAMB UTME 2020 registration commence on 13th January. In this post I would be bringing to you 100 JAMB Sweet Sixteen Possible Questions. During registration remember that  ONLY ONE mobile number can be used by one candidate to register for the  exam , candidates should avoid using of a mobile number that had been used for registration before. 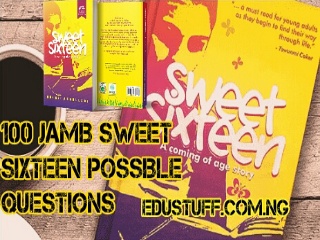 100 JAMB SWEET SIXTEEN POSSIBLE QUESTIONS BROUGHT TO YOU BY EDUSTUFF

(8) Which terrorist groups were mentioned in the story? (a) Avengers and Hezbollah (b) Isis and Militants (c) Bandits and Kidnappers (d) Isis and Boko Haram

(13) Which statement is true about the gift Aliya received? (a) She expected it (b) She was shocked (c) She hugged and thanked him (d) She was very happy

(18) Why did she change from wanting to be a pilot? (a) She heard about a crash (b) She is scared of height (c) She dislikes pilots (d) She prefers being a sailor

(20) Why does she want to be a lawyer now? (a) She wants to defend the poor (b) she read about Mahatma Gandhi (c) She read John Grisham’s books (d) She wants to follow Sogo’s dad

(24) What other package did Mr Bello give to his kid? (a) A tooth brush and hair brush (b) Beverages (c) Camera and phone (d) Camera and a card

(29) What name does Mrs Bello call Mr Bello when they settle their differences? (a) Joker (b) babe (c) Honey (d) Sweet

(35) Which subject was giving Aliya a challenge? (a) Biology (b) Chemistry (c) Mathematics (d) Geography

(39) According to the novel, who is a dumb girl? (a) A girl who cannot talk (b) A girl who hardly talks (c) A girl who always please boys (d) A virgin

(44) in what subject did Aliya see a girl cheating? (a) Chemistry (b) Physics (c) Biology (d) Geography

(46) What is the religion of the Principal of Aliya’s school? (a) Islam (b) Christian (c) Traditional (d) Hinduism

(48) Who was the first prime minister of India? (a) Nehru Jawaharlal (b) Mahatma Gandhi (c) Khalil Gibran (d) Muhammad Aliyu

(58) What indicates that Boko Haram is not out to destroy only Christians? (a) They bomb mosques (b) They are Christians (c) They are pastors (d) They are Nigerians

(63) “It is not my place to punish you for whatever sin you may have committed. But is my duty to help another human being who needs my help” Who is the speaker and the listener?
(a) Hunter and an animal (b) Slave and an injured Master (c) Son and Father (d) Soldier and Civilian

(65) “Many people thought she was snobbish. But I knew she was nice and generous” Who is Aliya describing (a) Bisi (b) Grace (c) Mrs Bello (d) Miss Salako

(69) Why did Aliya pick up the Teddy bear from the trash bin? (a) She likes it (b) She felt pity for it (c) She misses Bobo (d) She wants to please the father

(79) According to the novel, the lorry that is mentioned has an Inscription: “No Condition is Permanent”, the fading word is:
(a) No (b) Condition (c) is (d) Permanent

(81) “Sometimes, hunger is what you need to drive you ahead in life” The hunger here encourages____ (a) handwork (b) desire (c) skills (d) employment

(100) Who owns this quote : “Nobody can hurt me without my permission” (a) Alfred Tennyson (b) Mahatma Gandhi (c) Chinua Acheybe (d) Mr Bello

These are the 100 JAMB SWEET SIXTEEN POSSIBLE QUESTIONS.