On Tuesday, The Joint Admissions and Matriculation Board (JAMB), arrested some agents of one of the online payment services for Unified Tertiary Matriculation Examination (UTME), for allegedly charging above the approved cost by the Board. This was disclosed by JAMB’s Head of Media, Dr Fabian Benjamin, while monitoring the ongoing UTME/Direct Entry (DE) registration in Bwari, Abuja. 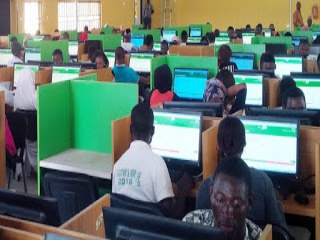 According to him, the agents, who worked for Unified Payments Services (UPS), charged some candidates the sum of N4,500, as against the approved cost of N4,000, for the registration.
He described this as unfortunate and disappointing as the board prior to the commencement of the registration has a meeting with the accredited vendors and agreed that out of the N3,500 generated for each e-pin, they have a N210 commission.
He said the board, based on the Federal Government’s directive decided to sell the forms for nothing more than N4,000; N3,500 for e-pin and N500 for the English reading text.
“We pointed this out to vendors that it was a presidential directive so that Nigerians are not exploited and we are ready to protect this.
“For any agent to sell above the approved price is unlawful and unacceptable; as we speak now, United Payments Service has been suspended from the sale of the 2020 UTME/Direct Entry (DE) forms,” Benjamin said.
Benjamin also said that the board had set out a team of investigators across all its centres nationwide to fish out those who perpetrate acts that were contrary to the rules and regulations of the board.
He also said that any bank or selling outlet that sells N1 above the approved price would be suspended and whatever deposit they had with JAMB would be confiscated.
Benjamin also advised candidates against registering from public examination tutorial teachers as they were not accredited vendors of the board.
Whoever registers with them, he said, would be disqualified from sitting for the examinations.
He, however, explained that the agents, who were caught in the act, had been asked to return the extra N500 they charged to the candidates and had since been handed over to the Police for further investigation.