JAMB 2020: UTME Registration And Exam Date Announced, many are asking “is jamb form out”, “when will jamb form be released”, “what is the JAMB 2020 registration date”, when is the closing date? We now have the answer. Other JAMB UPDATES will be shared too. 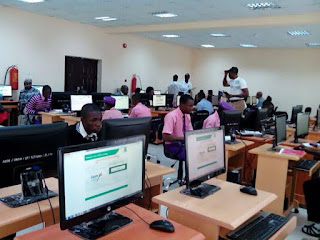 JAMB 2020: UTME Registration And Exam Date Announced, The Joint Admissions and Matriculation Board (JAMB) Registration of prospective candidates for the 2020 UTME & DE has been proposed to start on 13th January 2020 and close on 17th February 2020.

Prospective candidates should ensure that they register and obtain their
Candidates without the number cannot register with JAMB for admissions.
JAMB MAY DEPLOY DRONES TO MONITOR 2020 UTME
The Registrar, Joint Admissions and Matriculation Board, Prof. Ishaq Oloyede, hinted on Thursday that the board would approach relevant authorities to deploy drones during the 2020 Unified Tertiary Matriculations Examination.
The JAMB Registrar gave the hint at a stakeholders’ meeting held at the Congo Conference Hotel, Ahmadu Bello University, Zaria in Kaduna State.
Oloyede had said during the first day of the meeting on Wednesday that fraudsters were tampering with the CCTV cameras at its centres for the purpose of cheating.
He had said the act was being perpetrated with the connivance of the board’s technical official during the conduct of UTME.
At the second day of the meeting with the stakeholders which comprised Computer-Based Test Centre operators, technical advisors, service providers – MTN, Airtel, Galaxy backbone and other stakeholders – the JAMB boss hinted the idea of contacting the relevant government agency for the deployment of drones in the exam centres.
He said the board had no fewer than 613 Computer-Based Test centres and that the drones in addition to the CCTV cameras would be deployed to checkmate those planning to perpetrate examination malpractices in all the designated centres for the 2020 UTME.
He also warned operators of tutorial classes to steer clear of the 613 CBT centres, noting that most of the tutorial class operators were not qualified and at the same time act as a conduit for examination malpractices.
He warned that anyone caught aiding and abetting any candidate to cheat would be made to face the full wrath of the law.
“They are the centres for corruption in examination malpractices in the country,” he said.
This was just as he warned parents to keep away from UTME centres, pointing out that parents too encouraged their children or wards to cheat during examinations.
He said the board would no longer tolerate such conducts coming from parents who were supposed to be epitome of discipline in society.
“No third party is allowed,” he warned.
Oloyede also said only candidates that were biometrically verified would be allowed to sit for the 2020 UTME.
He added that the board would not tolerate makeshift CTB centres, saying that “centres must be dedicated to the examination and must be within the MTN or Airtel network coverage areas.”
“All centres network must be powered by switches; no hubs allowed.
“Other CBT centres (CTC/CRC) are encouraged to open with any account with any of the partnership banks,” he said.
Candidates are adviced to apply for JAMB as soon as possible before the deadline, on Edustuff we also have online tutorials to prepare you for the UNIFIED TERTIARY MATRICULATION EXAMINATION. ALSO search this website for JAMB Registration mistakes and how to correct them and more only on Edustuff.
What did you think about this article ? Kindly share with Friends and drop comment .