OPINION: Your Degree Is Just a Piece Of Paper ; Education IS Seen In Your Behavior - Edustuff

Home EDUCATION & LEARNING OPINION: Your Degree Is Just a Piece Of Paper ; Education IS...

DEGREE IS JUST A PIECE OF PAPER ; EDUCATION IS SEEN IN YOUR BEHAVIOR…
Education nowadays has become a trading activity for a piece of paper called “degree” 60% of students go to school to impress their parent with their certificate &results meanwhile most of the parents also expects best grades of result (degree)  from their children while we all don’t even bother to know what exactly education is all about ; education is the process of facilitating learning, or the acquisition of knowledge, skill, values, beliefs, habits, (self discipline)… 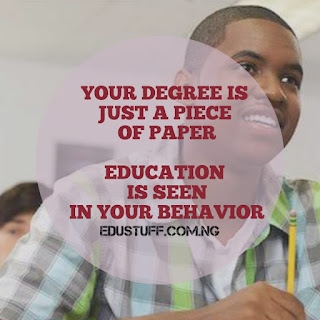 Talking of acquisition of knowledge & skill,  recent educational system mostly involve acquiring the immediate knowledge of whatever the lecturer or tutor dictates or injest into the student while  the students read basically on what he/she has been taught just to pass the exams with good results(degree)  ignoring acquisition of the skill( which involves the practicality of what the has been learning),  values,morals&good habits …

Moreover we have some universities in Nigeria where dullards and non diligent students have good grades due to some irrelevant &irresponsible reason : rich background,  ability to purchase lecturer’s hand out,  sexual harassment, informal relationship between the lecturer and the student’s parent/relatives…. And yet we say that person’s grade os his/her worth of education.. WILL ROGERS already said “schools ain’t what they used to be and never was”

Nevertheless, most companies are interested in your degree for your excellence is seen in your result and personality, because before you can be  selected to be interviewed your result is the itrst thing that speak of your potential but if being educated is graded by your then what is the necessity  of interview  and discipline evaluation?…

To be candid and frankly speaking, a degree holder is said to have schooled and not educated if he/she do not have the good attributes of education while a going girl in primary school is educated if seen with the following :
*Morality
*Humility
*Kindness
*Tolerance
*Respectful
*Loyalty & Honesty

Your attitude and behavior is an inevitable evidence of being educated or not because education is seen in your behavior which refers to the difference between schooling and being educated. The main aim of schooling is to have good grades and results (degree) but we get educated to be a literate, to be of good conduct & behavior. MARTIN LUTHER KING said intelligence plus character is the goal of true education moreover charisma without character is catastrophe… So ask yourself :” you claimed to be educated with degree but do you have/show the potential of a literate????

To round off,  being educated in the mind but not in morals is just like to educate a menace(threat)  to the society… There is no excuse for failure, ignorant isn’t even an excuse. The starting point of achievement is “desire” keep this constantly in mind that weak desire bring weak result,  just as small amount of fire makes a small amount of heat. Then our goals can only be reached through a vehicle of a plan in which we must vigorously act because a goal without a plan is just a wish, also challenge is an essential procedure  for achievement as difficulties increases,the nearer we approach the goal.. All this becomes your discipline which is why a person’s education is seen in his/her behavior so wherever you are always remember that you are an ambassador of yourself. Hence, let your education be seen in your behavior and not just in those certificates/degree with you….  Ask yourself. ARE YOU TRULY EDUCATED???